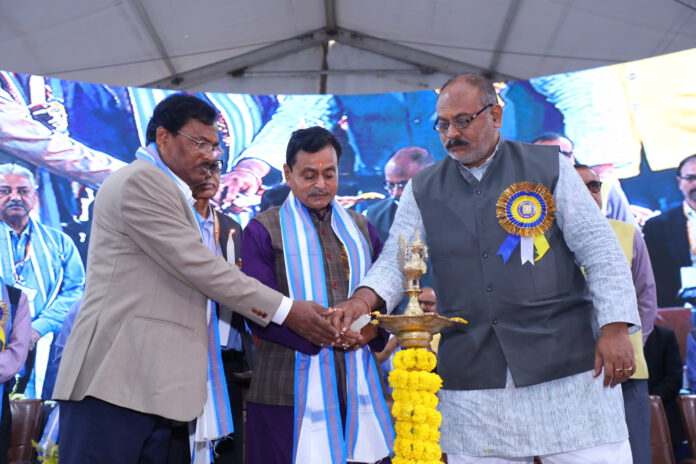 Shri Madan Mohon Maity, Convener and General Secretary of WestBengal Poultry Federation in his welcome address explained the role of the organization to the progress of poultry farming and industry in Eastern region states, particularly in the state of West Bengal. Shri Swapan Debnath, Minister In chargre, ARD Dept,M.S.M.E & Textile Dept, in his deliberation thanked the delegates participated in Kolkata International Poultry Fair from various parts of the globe as well from other states and confirmed that the poultry production would continue its growth in near future too, to overcome the rural unemployment. He mentioned about the success in poultry production during last seven years to overcome the deficit in poultry products in the state. Among the other dignitaries spoke on the occasion were
Prof.Purnendu Biswas,Vice Chancellor West Bengal University of Animal & Fisheries Sciences,Sri Ananta Deb Adhikary,Hon’ble MLA- Maynaguri Assembly Constituency and Chairman WBLDC Ltd,Dr.Yograj Tamang Director of animal Husbandry & Vet.Services
Govt.of WB,Sri Vasanth Kumar President Poultry Breeder Association,Mr.P.Chakradhar Rao,President Indian Poultry Equipment Manufacturer Association,Dr.Partha Sarathi Banerjee,Principle and station in-charge IVRI,ERS,Kolkata Mr.Samarendra Narayan Sen,President,WBPF

In the second day on 13thFebruary, important events scheduled are, useful seminar on poultry technologies and management wherein some eminent scientists and experts will update the modern poultry technologies to the benefit of poultry producers. Some eminent poultry personalities and experts was honored with befitting awards in the concluding session.West Bengal Poultry Federation, the apex body of the poultry producers and poultry industry in the state, has organized the 8 th Edition of Kolkata International Poultry Fair on 12-14th February, 2020 at Eco Park, Major Arterial Road(South East)Action Area II,NewTown Kolkata, West Bengal 700156.

Earlier, ‘Kolkata International Poultry Fair’ was organized for last seven occasions in the year 2012-2019 with support and coordination of the Animal Resources Development Department, Government of West Bengal and were much successful with the assembly and
participation of more than 30,000 visitors related to poultry production throughout the country including participants from Bangladesh, Nepal, Bhutan, Thailand & Myanmar and scientist from different part of the globe.The main goal and object of the Kolkata International Poultry Fair is to assemble people related to poultry industry from throughout the country and different part of globe to allow them to exchange their knowledge in poultry production and to interact their views on the subjects related to poultry management under one umbrella.8 th Kolkata International Poultry Fair has highlighted the new and modern innovations, products and services for the benefit of poultry producers in this country, particularly, in the Eastern region states including North-East region.

The three days Kolkata International Poultry Fair showcased sessions with Poultry Industry stalwarts, on ground interactions, highlighting national and international trends, business to business and business to consumers forums, along with day to day solutions for both
poultry producers and consumers.More than 250 exhibiting organisations participated in the 8th Edition of Kolkata International Poultry Fair and around 40000 visitors from different part of the country as well from neighboring countries like Bangladesh, Nepal, Bhutan, Malayasia, China, Thailand, Latin America (Brazil) confirmed to participate in this 3 days events.

Godrej Interio aims to strengthen its presence in Bengal with the...